Damage Inc. and Paper or plastic? 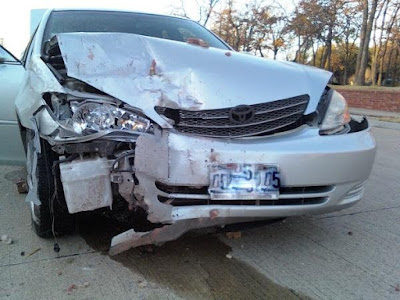 Yes I am OK...hopefully the car will be OK...
Now moving on...
Paper or plastic?
Whole Foods will be there first chain to completely stop using plastic bags! They plan to do so in all U.S., Canada, and U.K. store location no later than on Earth Day 2009 (April 22). They have stopped all orders for new so as they run out; they will no longer be available. Let us now just hope that other stores will follow in their footsteps. Some 4 to 5 trillion plastic bags—including large trash bags, thick shopping bags, and thin grocery bags—were produced globally in 2002, according to the Worldwatch Institute’s State of the World 2004 report. It is said that more than 100 million bags will be kept from the environment in 2009 alone as a result of this action. I for one would be happy to take a road trip and not see one of these bags in a tree or shrub.
Perhaps less widely known is the destructive impact that plastic bags have on marine life. As the they make their way into streams, rivers, storm drains, etc.; these bags are the major source of human-related waste on the seabed. Over 250 different species have suffered from entanglement or ingestion of marine debris...and that is only what has been reported.
So kudos to Whole Foods and let us hope and pray that other corporations will follow in their footsteps.
I know that is a strange combination of topics but being that this is my 100th post on this blog I did not want it to end on a negative...lol

Going out of busyness...

February 04, 2017
Busyness.. Complexity... Honestly this list could go on and on...      We need to just simplify. How is it that we get so caught up in things that we allow our souls to get so cluttered. Makes me think of a quote from the movie The Brothers Bloom where one of the characters told the other she believed he was constipated in his soul. Too graphic for you? So sorry...welcome to my blog. #keepinitreal Public Service Announcement: I also do not condone the watching of the aforementioned movie if you are easily offended HA!      So for me in 2017 I want to simplify; allowing the simple things to keep me holding on. Life will be much easier. With all the clutter, the "constipation", it causes unnecessary stress and tension that can lead to a feeling of being lost. For me, it will also cause me to (figuratively) hold on to things so tightly that eventually I will lose my grip and free fall. Thus falling into a state in which further causes confusion and doubt, among many
Read more