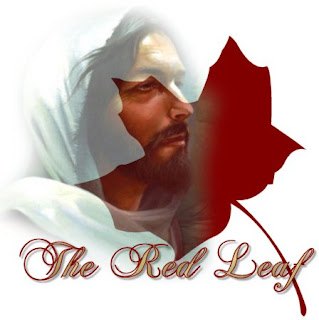 A man that was "big game" hunting in an unfamiliar land,
was crouched low, waiting for his prized moment to shoot. He
heard a 'rustling' behind him. He looked, but saw nothing so
he resumed his position, waiting. He heard it again. As he
looked in another angle, he noticed the commotion was coming
from a tree very near him. He spied a large snake slowly making
its way to a nest, high up in a tree. The mama bird was frantically
fluttering her wings while chirping, trying to 'scare' the snake away.
Not working, and seeing it was too close to her, she left her nest.

The hunter sat there, watching, knowing the sure outcome of
these little birds, when he noticed the mama bird making a quick
dash back to her nest. She was holding a red leaf in her beak,
she dropped it atop her nest, and flew away to a nearby branch, watching.
The hunter thought on this action that this little creature took,
so puzzled by it, he thought, surely the bird was maybe trying to
"hide" her chicks. He thought in his mind, not a chance!
That snake has "zeroed -in" on his prey. Then the hunter
witnessed something very perplexing.. ...strange. Just as the snake
came up to the tip of the nest, he turned and began his
journey back down the limb and then off the tree.

The hunter could not figure this out at all until
he came to one of the natives later that night.
The native asked him if he had any "luck" today, during his hunt.
The hunter replied, "I didn't, but a little bird did"...as he began
to relay to the native about what he saw, the native told him
that it was a poisonous leaf that she dropped in the nest. Highly
poisonous to the snake, they "just know" NOT to TOUCH it!!!!!

The Bible says that God sees the 'sparrows' . If He provided
a certain leaf that is offensive to this snake, thus
by it her young were not devoured. I ask,
you........HOW MUCH MORE pleading the
BLOOD of JESUS over our kids, to keep them from being
devoured by our Enemy?
God is just so good, and He's good all the time.
Remember, prayer does change things!

January 01, 2010
Let me start by telling any and all readers happy new year. So December was a truly rocky month for me emotionally, spiritually, physically, psychologically, and physiologically. What? You think I am a mess? Well, we all are if you want to be honest with yourself. One thing I can say is that over the last year I have made huge strides to being more healthy in all the aforementioned areas and I am. However, life is a continual process of progressive sanctification and I am aware of that. I know that at this time last year and especially just 18 months ago I was doing drugs, getting drunk often, and very promiscuous to top it all off. Well, thankfully I can say those  days are behind me, but now time to work on resolving other problems...again this growth should be  progressive.  This brings me to an issue with which I have gotten much better than I was, say fifteen years ago yet still need some work in this area. Whereas my impetuous behaviors are typically good and work to better my
Read more